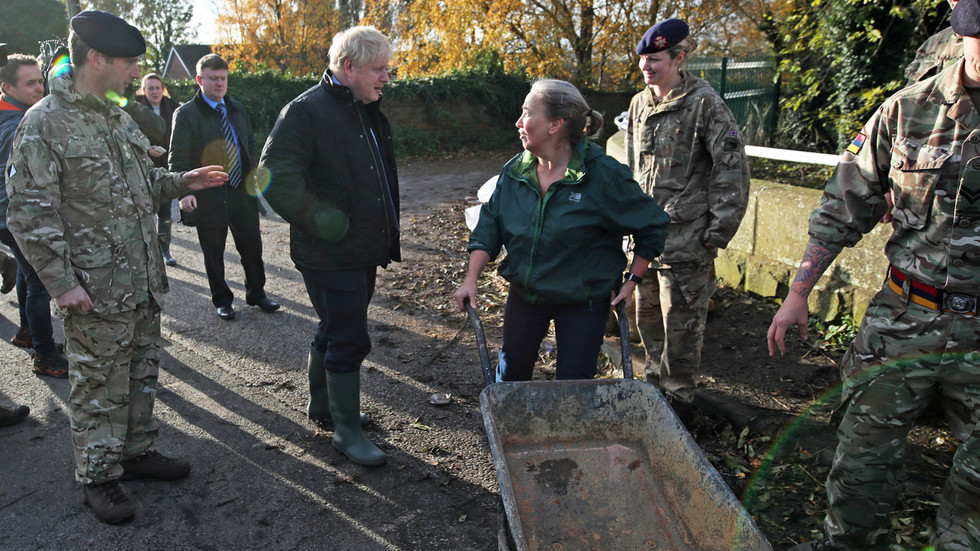 British PM Boris Johnson probably wishes he had stayed indoors after coming under fire from a number of angry victims of severe floods in South Yorkshire during a walkabout to see how the recovery operation was progressing.

Johnson was paying a visit to Stainforth on Wednesday, one of the places that has suffered most from torrential rainfall that has seen much of South Yorkshire as well as communities in the East Midlands and Lincolnshire underwater over the last week.

The prime minister attempted to have a chat with one resident who was busily helping with recovery work, but received a wholly unwelcoming response.

I’m not very happy about talking to you, so if you don’t mind I’ll just mooch on with what I’m doing. Because you’ve not helped us… I don’t want you to meet us.

“I’m not very happy about talking to you, so if you don’t mind I’ll just mooch on with what I’m doing because you’ve not helped us. I don’t want you to meet us.”

A rare Boris Johnson outing in public is going about as badly as expected. pic.twitter.com/iYnIUbYu3Z

If Johnson thought that would be his only uncomfortable altercation with a member of the public, he was soon to be disappointed. Approaching other victims of the flood, one of them shouted: “Took your time, Boris.” While another said: “Where have you been?”

A rather sheepish Johnson insisted that his government had been “on it round the clock,” and asked if there was anything in particular they could do for them, to which the resident bluntly replied: “No, thank you.”

South Yorkshire’s been under water for 6 days. Our Prime Minister has only just deigned go visit. pic.twitter.com/yF2jx1Bf0E

Finally, could the UK prime minister finish his walkabout of the area with no further embarrassments? Not quite. In a small community center where residents and volunteers had gathered, Johnson was seen shaking hands with a number of people before receiving a volley of harsh words from one disgruntled person.

Everyone’s living in poverty. The whole country’s a joke… Nobody gives a f**k. Sort it out.

Wow. Boris Johnson just run out of another village in South Yorkshire. For the 4th time in 1 hour yet another a flood victim tells him to bugger off. pic.twitter.com/r05tUnb6Jh

Some 100 soldiers have been deployed to help shore up the region’s battered flood defenses. The prime minister chaired a meeting of the government emergency committee, Cobra, on Tuesday night, following pressure from Labour leader Jeremy Corbyn to get a grip on the crisis.

Around 400 homes have been flooded and over 1,200 properties evacuated across areas of northern England in the past week, according to the Environment Agency.

‘We can’t erase the past… we have to learn from it’: Archbishop of Canterbury decries cancel culture