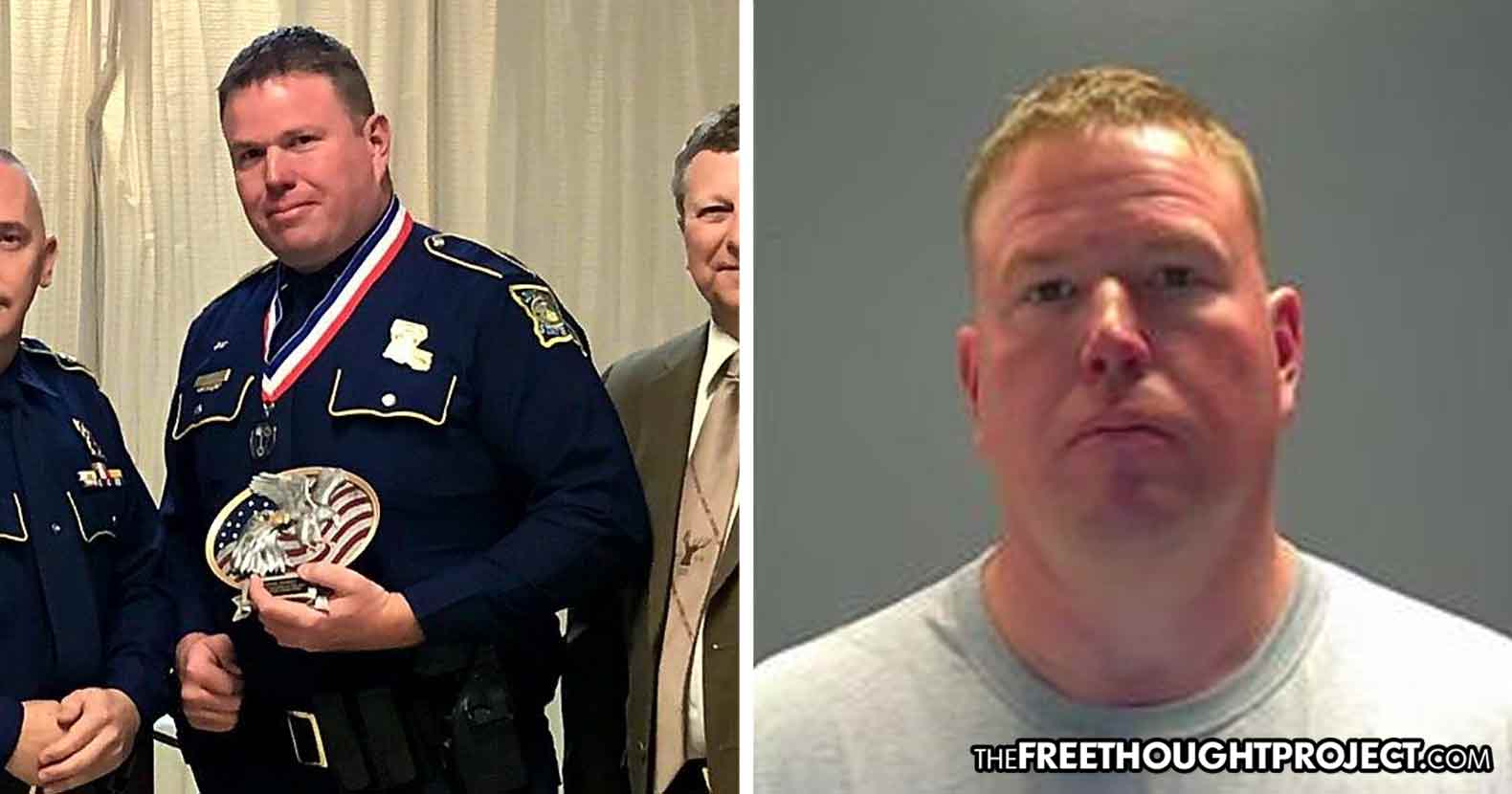 Baton Rouge, LA — In 2018, Louisiana State Police Trooper of 18 years, Jason Boyet received one of the department’s highest honors—Trooper of the Year. Fast forward two years, and this hero cop is sitting in a jail cell after being arrested on charges of production and distribution of child pornography.

After Trooper Boyet was arrested Wednesday, he was booked into the Tangipahoa Parish Jail then transferred into protective custody at another facility—likely due to his police officer status. He was then put on administrative leave, not fired.

The FBI and LSP Special Victims Unit began an investigation after a suspect, later identified as Boyet, allegedly produced and shared pornographic images on an unnamed online application. Troopers say agents identified Boyet as the online user and arrested him after an interview.

“The investigation remains ongoing with the potential for additional charges,” the LSP spokesperson said.

In a Facebook post from 2018, LSP Troop L issued the following praise about their star trooper of they year.

Senior Trooper Jason Boyet was recognized as the Louisiana State Police Troop L Trooper of the Year at the annual Slidell Elks Law and Order Night. When considering candidates, S/T Boyet’s supervisors highlighted his job performance, initiative, professionalism, and most of all leadership.

We wonder if they still feel this way about this alleged child predator.

Peppering the Louisiana State Police Facebook page are dozens of images of mugshots from people accused of petty theft, drug possession and other small crimes. Absent from their page, however, is Boyet’s mug shot and any mention that their Trooper of the Year was accused and arrested for allegedly producing and distributing child pornography. Seems legit.

Over the years, TFTP has reported on a lot of bad cops—thousands of them. And, over the years, apologists claim that these bad cops are the exception and somehow slipped through the filter into their jobs. While that statement may pacify some, it is simply not reality. In fact, TFTP has reported on dozens of officers who are the cream of the crop getting caught in the most disturbing crimes.

“Officers of the Year” are repeatedly caught raping, murdering, and preying on children thereby destroying this notion of slipping through the cracks.

A we previously reported, in an unprecedented sentence for a police officer, a former cop with the Fort Pierce and Port St. Lucie police departments, was sentenced to life in prison after being convicted of child exploitation. Micheal Edwin Harding was named Officer of the Year in 2011, when he was an officer at the Fort Pierce Police Department.

Despite being accused of sexual assault back in 2007, Champaign Police Officer Jerad Gale was given his department’s highest honor in March. On March 30, Gale was named Champaign’s Officer of the Year.

Just three months later he would be arrested for strangling and raping two more women.

A former Houston Police Department ‘Officer of the Year’ award winner, Noe Juarez, was arrested and was indicted on federal charges of conspiracy to possess firearms connected with a drug trafficking offense and conspiracy to distribute five or more kilos of cocaine.

Jonathan Bleiweiss, 34, pleaded guilty to an array of charges, admitting to 14 counts of armed false imprisonment, 15 counts of battery and four counts of stalking. However, he avoided all of the charges with “sex” in them.

Most likely due to his police officer status, this former Broward Sheriff’s deputy was given an insultingly lenient plea deal. As part of that deal, Bleiweiss did not face charges of sexual battery, and as such will not be required by the state of Florida to register as a sex offender.

A group of approximately 20 undocumented immigrants alleged that Bleiweiss, harassed them, molested them during pat-downs, and threatened them with deportation if they refused to perform sex acts. Bleiweiss was named officer of the year just prior to being exposed as a sexual predator.

Expanding the Child Tax Credit Will Do Very Little To Help the Poor. Here’s Why.

WATCH: Cops Violate Social Distancing to Arrest Innocent Dad for Playing in a Park with 6yo Daughter