Spread the love Because government is the antithesis to freedom, industrial hemp has been banned nationwide since 1937 ostensibly due… 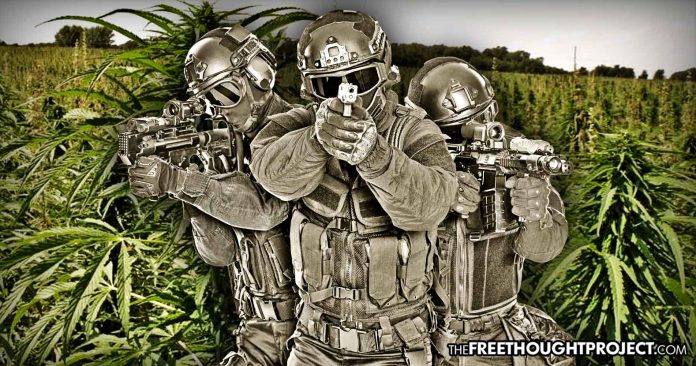 Because government is the antithesis to freedom, industrial hemp has been banned nationwide since 1937 ostensibly due to the plant’s similarities to marijuana. Many have speculated that this move was also due to the fact that cannabis is in direct competition with the pharmaceutical industry by providing far safer alternative treatments as well as directly competing with the petrochemical industry. However, all this changed in December after President Donald Trump signed the Agriculture Improvement act of 2018, legalizing industrial hemp on a national scale. But thanks to a police state, dependent on locking people in cages for a plant, three truckers in Idaho are facing down horrific prison sentences for carrying it.

Andrew D’Addario, Erich Eisenhart and Denis Palamarchuk have all been arrested in Idaho for transporting this incredibly beneficial textile crop that cannot get you high. Thanks to cops who “are just doing their jobs,” Eisenhart and D’Addario are scheduled to be sentenced next month after being found guilty of transporting this plant. Palamarchuk is due in court in October.

In Palamarchuk’s case, police falsely claimed that the nearly 7,000 pounds of hemp in his truck was marijuana. Only after police broke the same law they arrested him for — by transporting the plant across state lines for testing — did they realize it was actually hemp.

“With all the federal eyes looking at the Idaho case, what’s interesting is that the state shipped product to Kentucky to be tested,” observed Beau Whitney, a senior economist with New Frontier Data, a cannabis intelligence firm.  “I don’t know how they got it there, but I found it really fascinating.”

Despite the federal government ending prohibition of the hemp plant last year, backwards police state-addicted politicians in states like Idaho continue to kidnap and cage people for it.

“It’s like a nightmare out of a novel,” she said. “These are hardworking people working for a trucking company. This is what they do for a living – take this load from here to there. This is a good that has been legalized federally. They are doing what their boss told them to do.”

“For doing their job, they are threatened with five years in prison.”

A petition has been started which is demanding that all the charges be dropped against the trio and that the government stop squandering tax dollars locking people in cages for a plant that can quite literally do everything from save lives to run your car. As of Friday, the petition had already passed the 10,000 signature mark.

We are writing to ask that the Ada County Prosecutor’s office drop all charges against Andrew D’Addario, Erich Eisenhart, and Denis Palamarchuk, three truck drivers who were arrested and charged for driving industrial hemp across Idaho. Hemp has been legalized at the federal level and is legal in nearly every other state. We do not want our tax dollars spent prosecuting or incarcerating these individuals, and we do not feel their future employment prospects should be clouded with a criminal record on account of their work transporting hemp. It is cruel to upend these men’s lives in the current manner, and frankly, it is an embarrassment to the State of Idaho.  You are the only player in our legal system who has the power to fix the situation and ensure they can go on with their lives without a criminal record from these events. Please wisely use the discretion that you have been given, and drop the charges immediately.

Because they profit from locking people in cages for plants, lawmakers in Idaho do not differentiate between actual marijuana and hemp. So the fact that it was just hemp is of no consequence and these poor men will likely be locked in cages for no other reason than cops and prosecutors “doing their jobs.” A travesty indeed.

“There is a tight window of time right now to save these guys,” Representative Rubel said. “Once that sentencing happens there is no option to get these guys on their way in life without a criminal record.”

Hopefully these tyrants come out of their slumber and realize the atrocities they are committing against humanity by proceeding with these cases. Those who continue to kidnap and cage people for plants will most assuredly not be remembered as being on the right side of history.

The $1.9 Trillion American Recovery Act Could Have Huge Implications for State Tax Policies