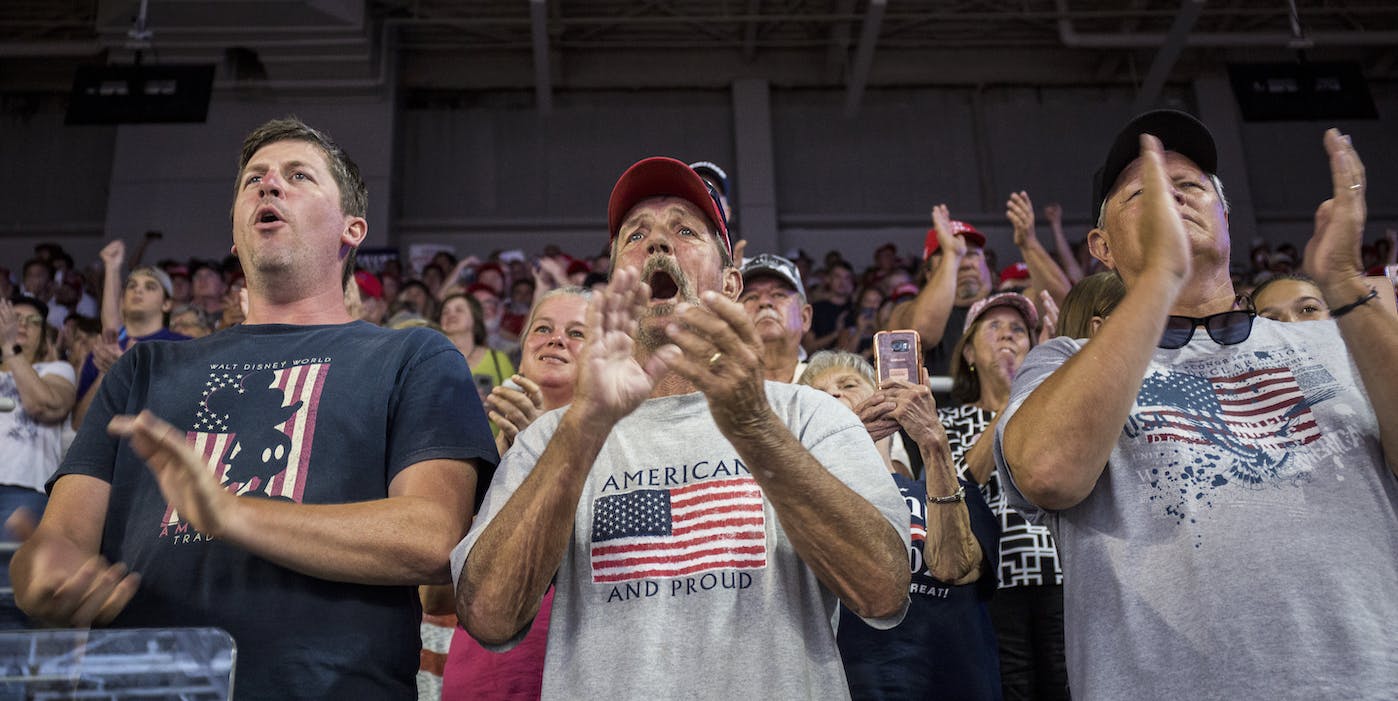 Less than two hours after Donald Trump claimed that he was “not happy” with supporters who chanted “Send her back” during his scripted rant against Rep. Ilhan Omar on Wednesday night, the president praised the same baying mob.

“These are people that love our country,” Trump said, echoing his defense of the white supremacists in Charlottesville who chanted “Jews will not replace us” as “very fine people.”

President Trump’s message to supporters who chanted about Rep. Ilhan Omar: “These are people that love our country. I want them to keep loving our country. And I think the congresswomen, by the way, should be more positive than they are” pic.twitter.com/KADqpzolkS

Earlier on Thursday, Trump blatantly lied about what happened during the televised rally in North Carolina the night before, offering the preposterous claim that he had stopped the chanting against the Somali-American congresswoman by “quickly” speaking over the din.

In fact, when the shouts of “send her back” erupted from the crowd near the end of Trump’s three-minute diatribe, filled with distortions and lies about the Minnesota Democrat, Trump paused for 13 seconds, as the call to deport a congresswoman was repeated eight more times.

Only after the chanting died down of its own accord did the president resume his attack on Omar, whom he had encouraged to “go back” to Africa in a tweet on Sunday.

Later in the speech, Trump tried to convince his supporters that Omar and three other Democratic congresswomen of color are unpatriotic for opposing his policies. Apparently unable to accept that members of the opposition party are simply doing their jobs by conducting congressional oversight of his administration, Trump told the crowd that Omar and her colleagues “hate our country.”

Omar responded by telling reporters on Thursday that it was “fascist” for Trump to claim that “because I criticize the president, I should be deported.”

Congresswoman Ilhan Omar spoke to reporters Thursday in Washington after the crowd at President Trump’s rally Wednesday in North Carolina chanted “send her back” as the president spoke about her. She says the president is racist and fascist. pic.twitter.com/4kUK5HJPRz

She went on to accuse Trump and his supporters of distorting the very notion of the United States, which, she said, “is supposed to be a country where we allow democratic debate and dissent to take place.”

“And so this is not about me,” she added, “this is about us fighting for what this country truly should be and what it deserves to be.”

Later on Thursday, Omar did go home, to her district in Minneapolis-St. Paul, where she was met by a crowd of supporters chanting, “Welcome home, Ilhan!”

100,000 Ballot Requests Were Invalidated in Iowa After Courts Sided With Trump Campaign