Donald Trump’s bloodthirsty threat to have protesters in Minneapolis shot by the military, issued in a tweet early Friday morning,…

Donald Trump’s bloodthirsty threat to have protesters in Minneapolis shot by the military, issued in a tweet early Friday morning, prompted Twitter to restrict access to the president’s message, ruling that it violated the social network’s policy against “glorifying violence.”

In the tweet, posted just before 1 a.m. Eastern Time, Trump first wrote that “THUGS are dishonoring the memory of George Floyd,” the black man whose killing on Monday by a Minneapolis police officer who knelt on his throat as he gasped for air has prompted protests and rage. The president then threatened to have soldiers open fire unless local authorities in Minneapolis regain control, adding, “when the looting starts, the shooting starts.”

The tweet was soon covered by an initial warning message, which said the president’s comments violated the platform’s rules, but had not been removed because “it may be in the public’s interest” to be able to read them.

A screenshot of a warning appended to a tweet from Donald Trump on Friday morning.

Readers who clicked past that screen were able to read the inflammatory tweet, but with the warning message above it. 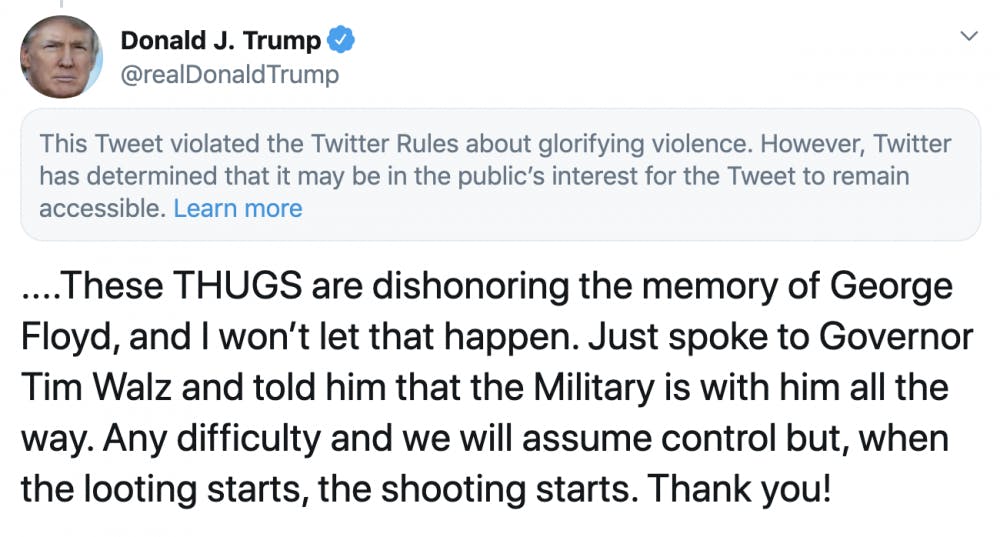 A screenshot of a tweet from Donald Trump, which came with a warning from Twitter about the president’s violent threat.

As Twitter noted in its explanation of why it had added “a public interest notice” to the tweet, that last phrase was even uglier to older Americans who might remember where they first heard it. The words were spoken in 1967 by Walter Headley, a racist Miami police chief, who told reporters that his officers would open fire if looting broke out in the city’s predominantly black Liberty City neighborhood.

Headley repeated the phrase the following year when protests in Liberty City devolved into riots during that summer’s Republican National Convention in Miami, which nominated Richard Nixon for the presidency. The protests were prompted, in part, by anger over Headley’s “stop and frisk” policy targeting black citizens and his preference for “shotguns and dogs” in the policing of a community demanding civil rights.

Trump’s reference to Headley’s comments was unlikely to have been accidental. In 2016, Trump told a New York Times reporter that his own acceptance speech was inspired by Nixon’s in 1968. “I think what Nixon understood is that when the world is falling apart, people want a strong leader whose highest priority is protecting America first,” Trump said. “The 60s were bad, really bad. And it’s really bad now. Americans feel like it’s chaos again.”

“This Tweet violates our policies regarding the glorification of violence based on the historical context of the last line, its connection to violence, and the risk it could inspire similar actions today,” the company said in a thread explaining its decision. “We’ve taken action in the interest of preventing others from being inspired to commit violent acts, but have kept the Tweet on Twitter because it is important that the public still be able to see the Tweet given its relevance to ongoing matters of public importance.”

In line with Twitter’s policy on tweets that it would have removed from the platform but for the public interest exception, the company added that “engagements with the Tweet will be limited. People will be able to Retweet with Comment, but will not be able to Like, Reply or Retweet it.”

The mayor of Minneapolis, Jacob Frey, was asked to respond to the president’s tweet, and an earlier one calling him “very weak,” at a news conference early on Friday.

Frey shook his head in disbelief as the tweets were read to him.

Mayor Frey responds to the President’s tweets: Weakness is refusing to take responsibility for your own actions. Weakness is pointing your finger at somebody else during a time of crisis. Donald Trump knows nothing about the strength of Minneapolis. We are strong as hell.. pic.twitter.com/BtMyjrA6on

“Well, let me say this,” Frey responded. “Weakness is refusing to take responsibility for your own actions. Weakness is pointing your finger at somebody else during a time of crisis. Donald Trump knows nothing about the strength of Minneapolis. We are strong as hell. Is this a difficult time period? Yes. But you better be damn sure that we’re going to get through this.”

Twitter’s decision to draw a line for Trump came just hours after he issued an executive order threatening to make it easier for users to file lawsuits against the company for perceived political bias. The order was a transparent act of retaliation against the company for having appended a fact-checking note to a tweet in which Trump made a range of false claims about plans for California to make it easier for registered voters to vote by mail during the ongoing pandemic.

Jaffer’s colleague Katie Fallow, a senior attorney at the First Amendment Institute, noted that unusual language that appeared to have been added to the order without much review, “make the retaliatory motive even clearer.”

“Twitter now selectively decides to place a warning label on certain tweets in a manner that clearly reflects political bias,” one part of the order reads. “As has been reported, Twitter seems never to have placed such a label on another politician’s tweet.”

What’s odd, as Fallow notes, is that the order references “another politician” without saying that the first politician it is concerned with here is Trump, although that is quite clear from the context. Another less than subtle hint is that the order throws in a gratuitous attack on the company’s failure to label tweets by Rep. Adam Schiff, who led the impeachment of Trump, in which he supposedly “mislead his followers by peddling the long-disproved Russian Collusion Hoax, and Twitter did not flag those tweets.”

The Border Patrol Calls Itself a Humanitarian Organization. A New Report Says That’s a Lie.

Faced with ICC Investigation, Apartheid Israel Asserts Moral Superiority Over The Victims of Its Terror