While communities across the U.S. have been struggling with massive pollution from the military’s use of firefighting foam that contains…

While communities across the U.S. have been struggling with massive pollution from the military’s use of firefighting foam that contains PFAS, Japan has awoken to its own environmental crisis from the industrial chemicals in the foam. The growing awareness of the issue in Japan is largely due to one reporter: Jon Mitchell, a British investigative journalist based in Tokyo, who has spent years chronicling environmental contamination in the Asia-Pacific region.

His most recent book, “Poisoning the Pacific: The U.S. Military’s Dumping of Plutonium, Chemical Weapons, and Agent Orange,” is based on thousands of pages of documents he obtained from the U.S. military through the Freedom of Information Act; they detail the widespread contamination of bases and the areas surrounding them with PFAS and other hazardous substances, including chemical weapons, Agent Orange, jet fuel, and PCBs.

In the U.S., the fight over PFAS contamination from military installations, which The Intercept was first to report in 2015, now usually centers on the degree to which the Department of Defense is obligated to clean it up. But in Japan, which is home to 78 U.S. military facilities, bilateral agreements release the U.S. government from any obligation to test for contamination caused by its operations or remove it if it’s detected. 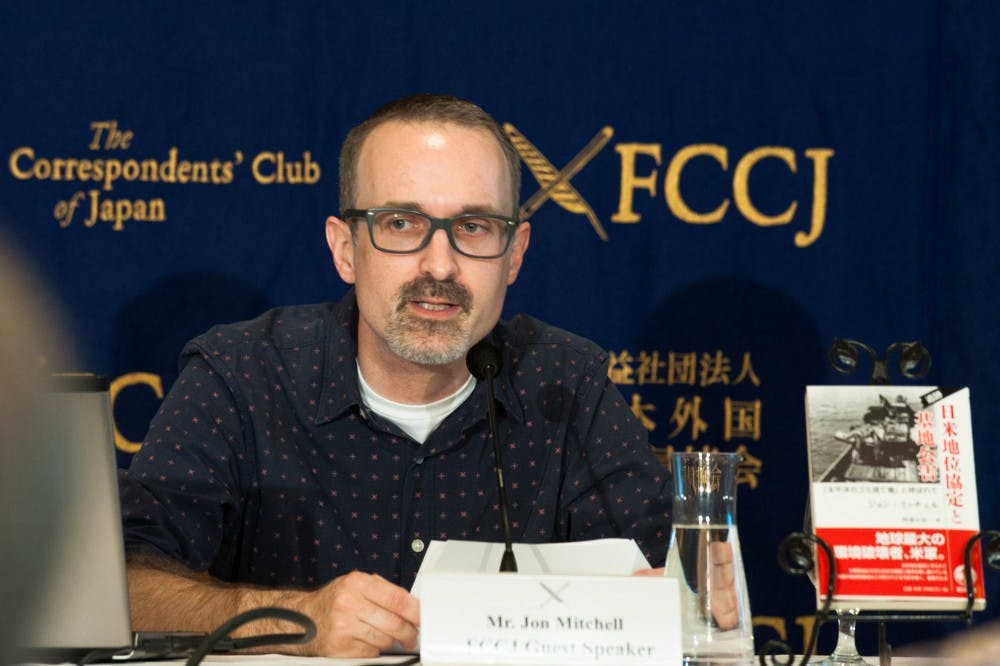 At the Foreign Correspondents’ Club of Japan, Tokyo, in August 2018, Jon Mitchell gives a press conference about U.S. military contamination.

The Intercept spoke with Mitchell about his reporting on the environmental consequences of U.S. military operations in Japan and how it’s been received in both countries; the interview has been edited for length and clarity.

You have described massive contamination in so many parts of Japan. How many releases of AFFF (aqueous film-forming foams, or firefighting foam) did you find through the documents you received?

What has the U.S. military told the Japanese people about the PFAS released from its bases there?

The U.S. military has never released to the public any information about contamination within the installations. Marine Corps accident guidelines go so far as to order commanders not to tell Japanese officials about politically sensitive incidents.

A lot of the contamination you report is from the Kadena Air Base in Okinawa, which is the biggest American Air Force installation in Asia. How have people living there been affected?

The main source of drinking water in Okinawa, which serves 450,000 people, is from wells and rivers that run alongside the base. The wells have been severely contaminated with PFAS. The river running off the base, Dakujaku River, has been checked by the Japanese government, and it’s the highest level ever recorded in a river in Japan. … Not surprisingly, some of the people drinking this water have been found to have extremely elevated blood levels of PFOS. The Okinawan people are furious and scared. 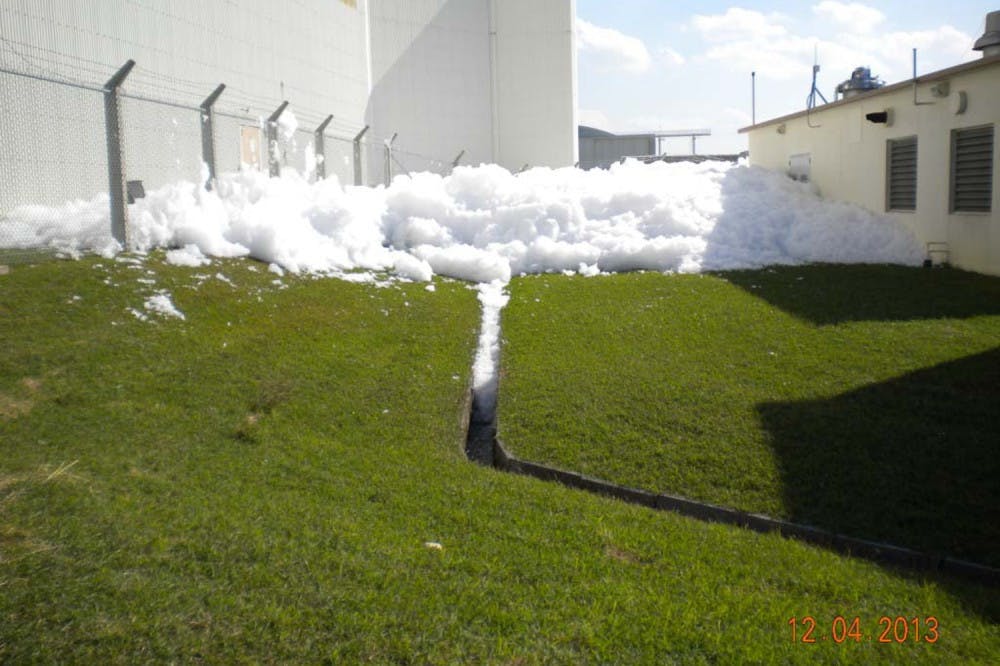 On Kadena Air Base, Okinawa prefecture, an accident blamed on a malfunctioning sprinkler system discharged tens of thousands of liters of firefighting foam in December 2013.

Has anyone tried to get the U.S. military to cover the costs of cleaning this up?

“The U.S. has total jurisdiction over who can enter its bases, so Japanese officials can’t even sample the water on the bases.”

The Department of Defense will not fund cleanup in a foreign country unless it’s very serious and has an immediate impact on human health. If this contamination had been detected within the U.S., there are a whole range of programs in place to remediate it. But not in Japan. Here, the military only needs to remediate contamination within its own bases if the contamination is deemed urgent. According to an agreement between the U.S. and Japan, the U.S. has total jurisdiction over who can enter its bases, so Japanese officials can’t even sample the water on the bases. As of 2015, Japanese authorities have had the right to request on-base checks after a hazardous spill, but so far we know of only one instance in which the Department of Defense has granted that permission. The only way they can find out whether there is contamination on the base is to capture the outflow of the stormwater coming off it and test the rivers.

Okinawa is now filtering drinking water to reduce the levels of the chemicals. In late October, the levels of combined PFOS and PFOA averaged 14 ppt. So the local government is paying to remove the chemicals that were put there by the U.S. military?

You write that the pollution is ongoing. Can you tell me about how a barbecue recently turned into an environmental incident?

“Time and time again, it’s been the Marines who have damaged the environment at Okinawa.”

That was in April when a bunch of Marines were in quarantine because of the coronavirus in a hangar on Futenma Marine base in Okinawa. They decided to have a barbecue. The heat from the barbecue triggered the AFFF system. And then the Marines kind of panicked. The doors of the hangar had not been shut for 10 years, and they were impossible to close. So most of the foam escaped into the local community. When the fire team finally arrived, they didn’t have a key to the room to turn off the fire system. And so the sprinklers were firing for 25 minutes nonstop, and there was so much foam it went into the playground and the nearby river. 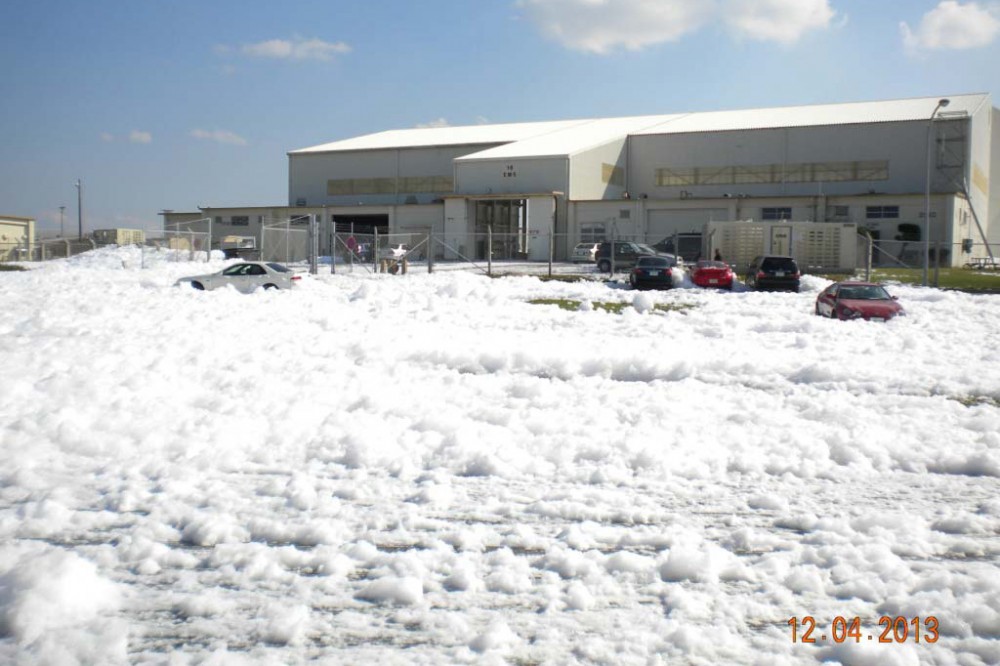 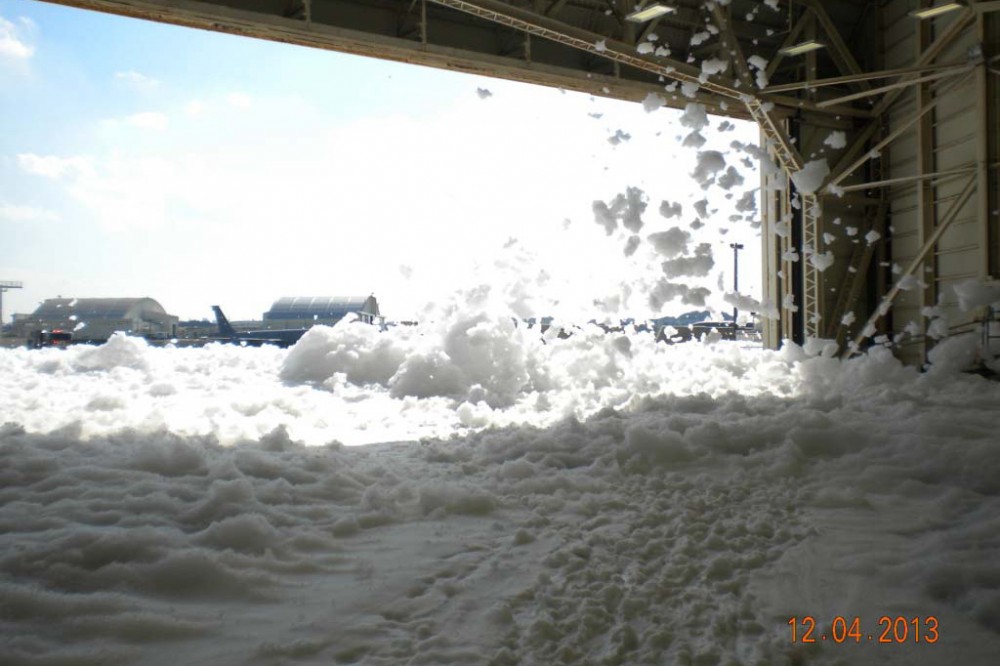 On Kadena Air Base, Okinawa prefecture, an accident blamed on a malfunctioning sprinkler system discharged tens of thousands of liters of firefighting foam in December 2013.Photo: USAF/US Freedom of Information Act

And that wasn’t the only time Marines had an accidental release of firefighting foam, right? There was also a December 2019 incident in which 38,000 liters of PFAS-containing foam were unintentionally sprayed out of the system.

Yes, and there was also a 2015 incident in which a drunk Marine launched the sprinkler as an act of vandalism. That released tens of thousands of liters of firefighting foam.

What happened to him?

He received a pay cut and 3 months in the brig. But the Japanese government didn’t do anything to him because they didn’t know about it. On-duty service members are exempt from prosecution for damage to Japanese property. Time and time again, it’s been the Marines who have damaged the environment at Okinawa.

The incineration of PFAS has recently become a big issue here in the U.S. I noticed that AFFF from the Marine base in Okinawa was incinerated, and the waste from the incineration was buried at an Okinawan landfill that was later found to have extremely high levels of PFAS in its groundwater.

Yes. The Marine Corps didn’t notify the contractor that the material it was burning contained PFAS.

What happened when you asked the Marine Corps about that?

They defended their procedures as “appropriate.”

Some of the emails you obtained through FOIA were about you. One described you as “adversarial” and called the tone of your reporting “hostile.” Another said, “He has an agenda and is fairly open about it.”

When I was invited to give a talk at an American university in Tokyo in 2016, the U.S. embassy in Tokyo reached out to the university and asked that a State Department official be present at the talk and be allowed to rebut the talk. None of this has surprised me. Since Hiroshima and Nagasaki, the U.S. military has been covering up contamination and pressuring journalists who reveal that contamination.

Do you think your reporting is hostile?

No. I hear from U.S. service members that it helps them and their families so much. It’s not anti-military, it’s anti-pollution.

MintCast Interviews Doug Valentine, Author of The Phoenix Program and The CIA as Organized Crime

From “Spook Air” to the “Lolita Express”: The Genesis and Evolution of the Jeffrey Epstein-Bill Clinton Relationship