Massive, sustained protests in Baghdad and Tehran that have been met with violent responses from security forces throughout the fall…

Massive, sustained protests in Baghdad and Tehran that have been met with violent responses from security forces throughout the fall and winter have rapidly altered the political dynamics in both Iraq and Iran. But it is still uncertain whether the grassroots anger that has erupted will lead to significant change in either country — or whether the United States will play a role in shaping the outcome.

In Iraq, the political establishment has been shaken since protests in Baghdad and other cities began in October, when Iraqis took to the streets in anger over systemic corruption, a lack of basic services, and Iranian domination of Iraq’s government. Iraqi security forces have violently cracked down on protestors. In late November, demonstrators brought down the Iranian flag and put up an Iraqi national flag on Iran’s consulate in Najaf before setting the building on fire.

Iraq’s leaders initially balked at the protesters demands for reform. But as the demonstrations continued, Prime Minister Adil Abdul-Mahdi finally submitted his resignation on Nov. 30.

Abdul-Mahdi had wavered and nearly quit a month earlier, but in late October, Iranian Major General Qassem Suleimani, the powerful head of the elite Quds Force, an arm of Iran’s Islamic Revolutionary Guard Corps that operates with impunity throughout Iraq, intervened to bolster Abdul-Mahdi and keep him in power.

Suleimani’s intervention came just before The Intercept and the New York Times reported on leaked Iranian intelligence cables that publicly documented Iran’s perspective on its deep influence in Iraq for the first time. The leaked cables, sent by Iran’s Ministry of Intelligence and Security between 2013 to 2015, revealed that many of Iraq’s top political, military, and security officials have had close relationships with Tehran for years. One leaked cable from 2014 identified Abdul-Mahdi, then serving as Iraq’s oil minister, as having a “special relationship with IRI” — the Islamic Republic of Iran.

By the end of November, the pressure on Abdul-Mahdi was so intense that Iran could not protect him any longer. Iraq’s parliament quickly accepted his resignation without any clear successor in sight. 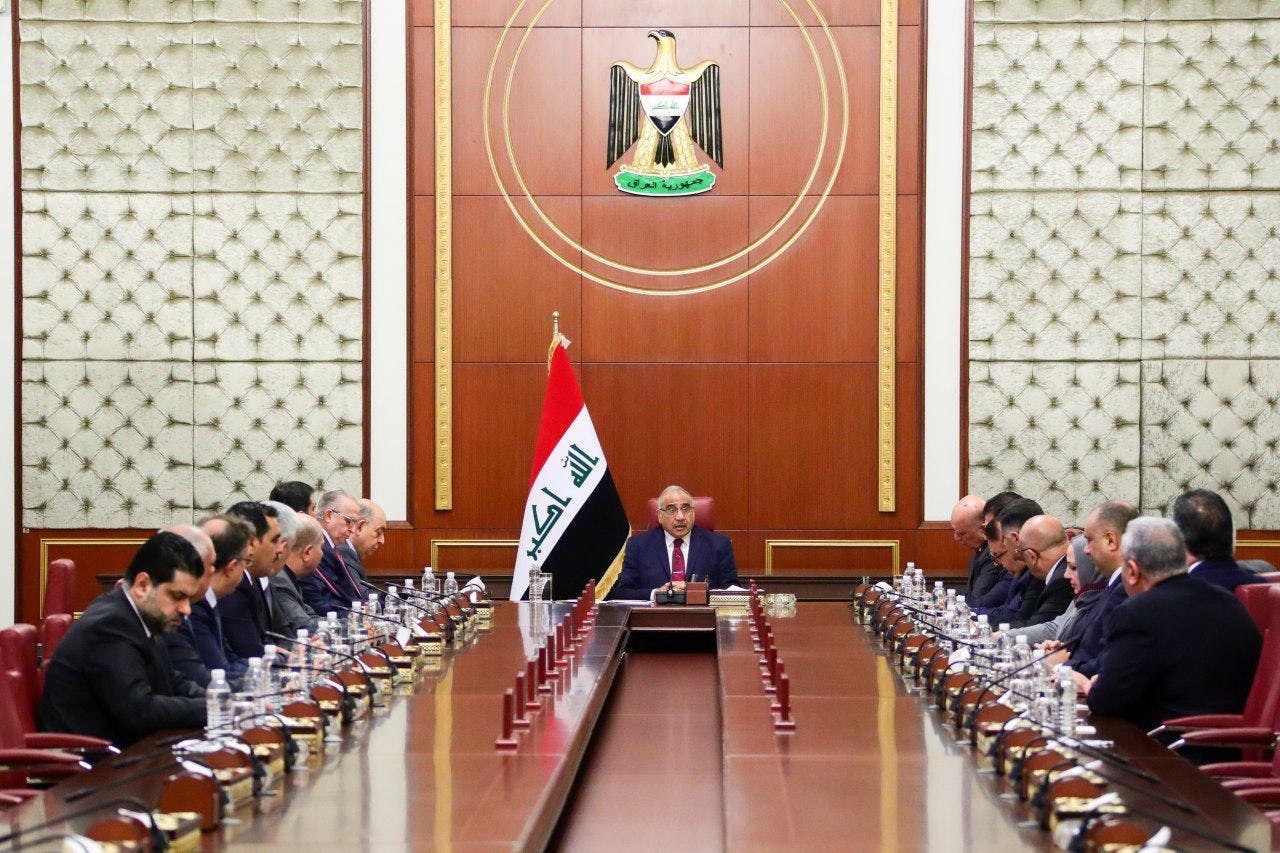 Iraqi Prime Minister Adil Abdul-Mahdi speaks during a cabinet meeting in Baghdad after handing in his resignation to the parliament on Nov. 30, 2019.

Washington was happy to see Abdul-Mahdi go. After initially viewing him as an acceptable compromise candidate when he was named prime minister in 2018, senior U.S. officials say they quickly realized he was unable to stand up to Iran.

“We have had to be extremely cautious about sharing [information and technology] with Iraq, because it could go to Iran,” said one senior U.S. official.

Abdul-Mahdi’s lack of interest in engaging with Donald Trump or his White House didn’t help. One senior U.S. official said that Abdul-Mahdi declined an invitation to meet with Trump when the president visited Iraq last Christmas, opting for a telephone conversation instead. Abdul-Mahdi also declined to meet with Vice President Mike Pence when he traveled to Iraq in November, the official added, again speaking to him by phone. By contrast, the senior official said, Abdul-Mahdi has traveled regularly to Tehran to meet with Iranian officials as prime minister.

But while the Trump administration’s influence has ebbed in Baghdad, Iran is now also facing serious problems at home that could interfere with its Iraq policy. Beginning in November after a big spike in gas prices, large-scale protests have erupted in Tehran and other Iranian cities. Protesters quickly moved beyond demands for economic relief to call for the ouster of the Iranian government.

The demonstrations have been met with murderous fire by Iranian security forces. Accurate figures aren’t available, but a State Department official said in a briefing last week that 1,000 or more protestors have been killed, while at least 7,000 have been arrested.

In Iraq, meanwhile, at least 350 people have been killed in the demonstrations so far, many of them protesters shot dead by security forces. The Iraqi government’s violent efforts to suppress the demonstrations appear to have been aided by pro-Iranian militia units, according to some reports. Last week, protestors were stabbed in Baghdad’s Tahrir Square, the hub of the anti-government demonstrations, after large groups of men arrived in the square flying the insignia of an Iranian-backed militia. Protesters were suspicious of the pro-Iranian group, but it couldn’t be conclusively determined whether those militia members were responsible for the stabbings. 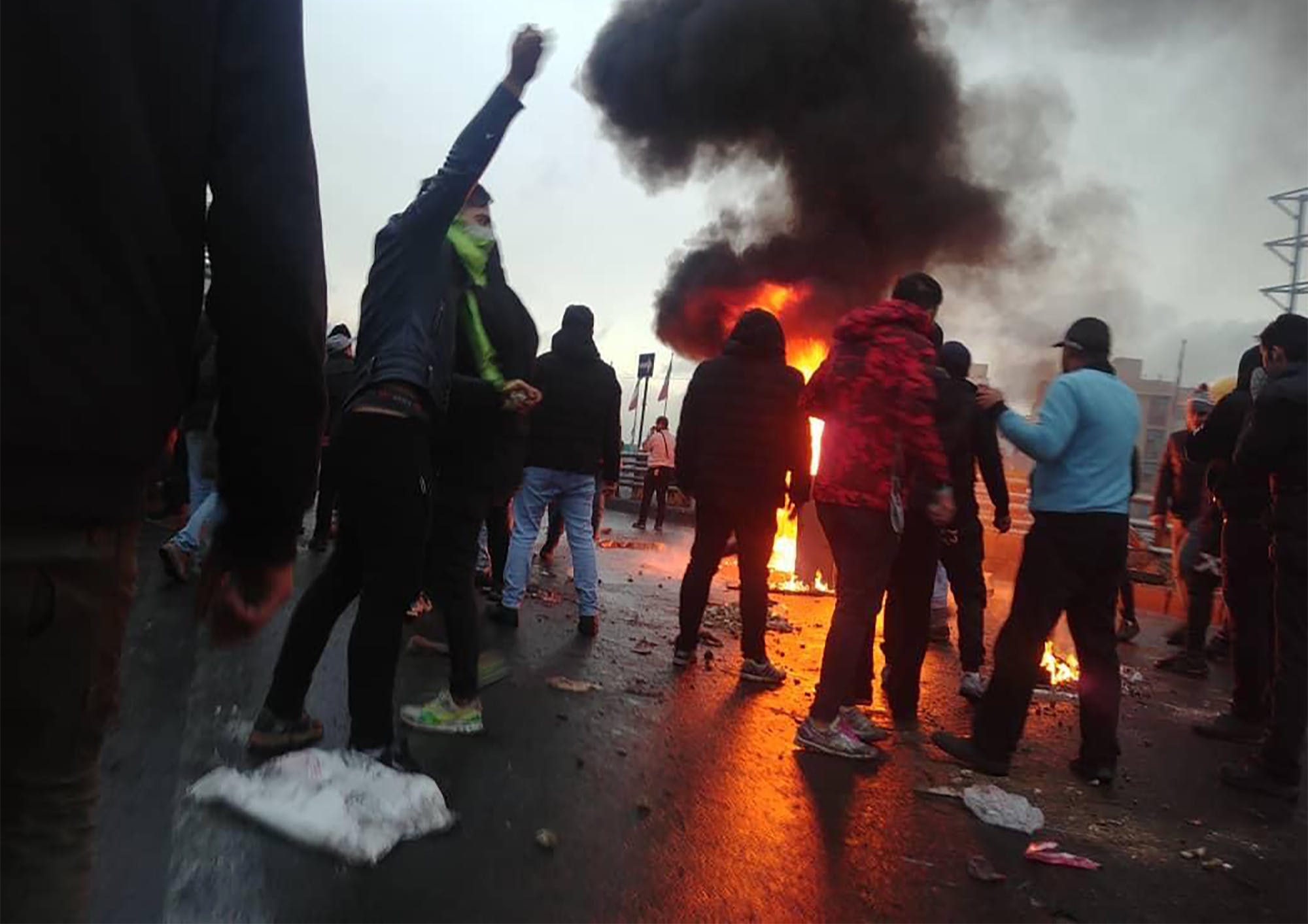 Iranian protesters gather around a fire during a demonstration in Tehran on Nov. 16, 2019, against an increase in gasoline prices.

Iran’s dominant position in Iraq and influence over the country’s political leadership may not be well understood by many Americans, but it is the direct result of the 2003 U.S. invasion of Iraq that toppled Saddam Hussein. The invasion was justified by the George W. Bush administration on the grounds of specious claims of ties between Saddam and Al Qaeda and the supposed existence of Iraqi weapons of mass destruction.

There was another historically false claim made by the neoconservative ideologues backing the Iraq invasion as well: that ousting Saddam would not benefit Iran. In fact, the neoconservatives argued that one of the benefits of the Iraq invasion would be to curb Iran’s influence in the Middle East. That turned out to be one of the greatest miscalculations in the history of American foreign policy. Rather, Iran was the great beneficiary of the U.S. invasion, which eliminated Iran’s greatest regional adversary by getting rid of Saddam and his Baathist, Sunni-dominated regime. That created the opportunity for Iraq’s Shia majority to gain power in Baghdad.

Suddenly, Iran, which had long been the only major Shia power in the region, had a Shia-dominated neighbor. What’s more, many of the Shia leaders who came to power in Iraq after the U.S. invasion had spent years of exile in Iran.

John Maguire, who was deputy chief of the CIA’s Iraq Operations Group at the time of the 2003 invasion, says that the Bush administration’s decision to disband the Iraqi Army, coupled with a draconian purge of Baath Party members from Iraqi government service, triggered chaos and eventually an insurgency that gave the Iranians an opportunity. “The ensuing anger, resentment and violence opened the door for Iran, led by General Suleimani and his Quds force, to exploit the situation and run circles around” the Americans, Maguire says.

Grappling with a bloody post-invasion insurgency and seeking a short-term fix to stabilize Iraq, the Bush administration brokered a new electoral system for Iraq that made sure that political representation was along sectarian lines. That guaranteed a permanent state of tension between Sunni and Shia; the persecution of the Sunni minority by the Shia-dominated government in Baghdad helped lead to the rise of ISIS in Iraq.

Meanwhile, the Trump administration’s efforts to squeeze Iran by imposing more economic sanctions have had an unintended consequence — the sanctions have led Iran to try to tighten its grip on Iraq. Kenneth Pollack, a former CIA analyst now at the American Enterprise Institute, believes that the Iranians have reacted so forcefully to the protests in Baghdad because Iraq is a valuable economic outlet that helps Iran skirt the sanctions. “Iraq’s economy is critical to Iran for things like currency manipulation and smuggling, dealing with the sanctions,” said Pollack.

Trump administration officials agree. “Iran has become increasingly dependent on Iraq and Lebanon as economic release valves,” one senior U.S. official said. But the administration seems to think that’s a good thing — a sign that sanctions are having an impact on Iran. The fact that U.S. sanctions policy has led Iran to intensify its efforts to maintain its influence in Baghdad doesn’t appear to have merited much discussion in Washington.