Amid a rapidly worsening COVID-19 pandemic, Bolivia’s coup government has once again suspended much-anticipated elections that were due to be…

Amid a rapidly worsening COVID-19 pandemic, Bolivia’s coup government has once again suspended much-anticipated elections that were due to be held on September 6. This is the third time the administration of Jeanine Añez has postponed them because of the virus, setting a new date for October 18.

The move has drawn condemnation from both left and right, but for different reasons. MintPress’ Ollie Vargas, who covered events from inside the country since last year’s November 10 coup, was dismayed, announcing:

Bolivia’s unelected coup regime has extended it’s illegitimate power by canceling elections once again. When we get to October they’ll invent another reason to postpone, then another, till they’ve found a buyer for the lithium & other natural resources. This is a dictatorship.

Former President Evo Morales of the Movement to Socialism (MAS) party agreed, stating that “The de facto government wants to gain more time to continue the persecution of social leaders and against MAS candidates. It’s yet another form of persecution. That’s why they don’t want elections on September 6.” Meanwhile, coup leader Fernando Camacho rejected the new date, demanding elections be scrapped altogether, a position shared by the far-right Santa Cruz “Civic Committee.”

Morales was reelected in October for another five year term. A popular president, he reduced poverty by half and extreme poverty by three quarters, while increasing the (inflation-adjusted) per capita GDP by 50 percent in his 13 years in office. He managed this primarily through a series of nationalizations of the country’s key industries and by expelling the predatory International Monetary Fund (IMF) from Bolivia. But in November, the military and police intervened, demanding he resign. Today he lives in exile in Argentina. Nevertheless, the latest polls show that the MAS candidate Luis Arce, who served as Morales’ finance minister, would win the election outright on the first ballot if it were held today. Arce accused Añez of using the pandemic as a pretext to extend her rule.

From popular mandate to elitist candidate

A little-known senator from a party that received only just four percent of the vote in October, Añez was handpicked by the military to become the new president. A strongly Christian conservative who described the country’s indigenous majority as “satanic,” she arrived to take her new place in government clutching an oversized bible. She enjoyed the support of the country’s elite, the U.S. government, and the entire spectrum of corporate media, who cheered the events as they happened. The new administration immediately began to suppress and criminalize dissent, including massacring protesters who objected to the takeover. Despite leading in the polls, the MAS have been suppressed, with many of their leaders jailed or facing dubious charges. Morales himself faces life in prison for “terrorism” if he sets foot in his country again. 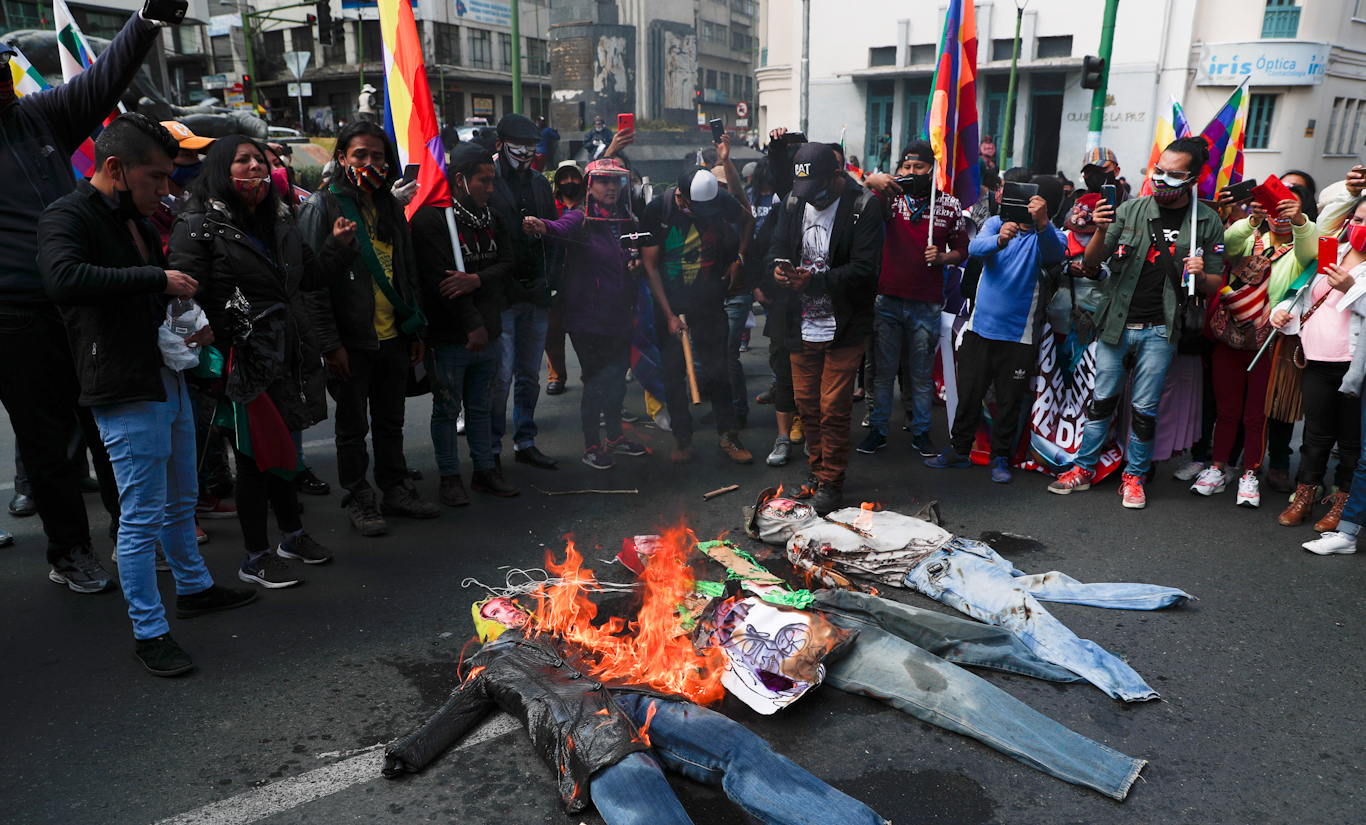 Bolivians burn effigies of Jeanine Anez and other officials in the US-backed coup gov’t during a protest in La Paz, July 14, 2020. Juan Karita | AP

Añez has also overseen the selling off of the country’s national resources, including in the hydrocarbon industry, and has completely reoriented its foreign policy to align with the United States. She has also begun working with the IMF, taking out a $ 327 million loan in April. The U.S. government strongly backed Añez from the beginning; three days after the coup the State Department released an official communiqué “applauding” her for “leading her nation” through a “democratic transition.”

The stated reason for the postponement of the elections is the country’s continued inability to deal with the coronavirus pandemic. Supreme Electoral Tribunal President Salvador Romero said the move was necessary to keep Bolivia’s hospitals and cemeteries from collapsing under the strain of the increased deaths. “This election requires the highest possible health security measures to protect the health of Bolivians,” he said. One reason why the country’s medical system is under such pressure is that Añez expelled hundreds of Cuban doctors working primarily with the country’s poorest people, leading to closures of hospitals and health clinics. While Bolivia has officially reported 65,000 cases and 2,407 deaths, some believe those figures could be an underestimate. This week, police said they recovered 420 dead bodies from streets, vehicles and homes in La Paz and Santa Cruz. In June, Añez herself tested positive for COVID-19.

In response to the delayed elections, Bolivian trade unions have given the government 72 hours to reverse the decision, threatening “indefinite mobilizations” to restore democracy. Thus, it appears that even after eight months of constant political struggle, tensions could be about to be increased once again.

Feature photo | A woman wearing a face mask and shield against the spread of the new coronavirus walks past soldiers in riot gear standing on a sidewalk during quarantine, in La Paz, Bolivia, May 11, 2020. Juan Karita | AP

The Jungle and the Pandemic: The Meat Industry, Coronavirus, and an Economy in Crisis

Social Media and Social Control: How Silicon Valley Serves the US State Department

The Unprecedented and Illegal Campaign to Eliminate Julian Assange