Sacremento, CA – In a bizarre case that shows the increasing overreach of the police state in the United States,… 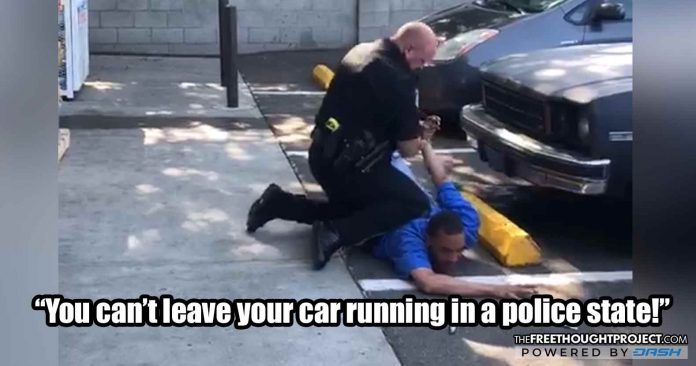 Sacremento, CA – In a bizarre case that shows the increasing overreach of the police state in the United States, their oversight has apparently grown to the point where officers are targeting drivers who leave their cars running while they walk into a convenience store to make a purchase.

A recent incident was caught on cell phone recording as bystanders tried to make sense out of the scene that led to Craig Williams being arrested, even though it appeared that he has done nothing wrong. It did not seem to matter to the arresting officer that he was on private property and had not been called to the scene as no crime had been committed. He simply saw that Williams left his car running and attempted to make contact with Williams who reportedly did not want to speak with the officer.

The so-called “crime” of leaving a car running unattended costs citizens $ 250 in fines, another stream of what extortionists call “revenue.” Williams was apparently unaware of not only the law but the reason why he was being detained, apprehended—even though he was not running—and arrested, all for the crime of wanting to keep his car running.

Defense Attorney Mark Reichel told ABC10 that when a motorist is being cited for this infraction, they are technically under arrest by California law. “If you are still not giving out the driver’s license, you are still not willing to sign the ticket, they can actually arrest you for resisting an arrest, obstructing an officer,” he said.

Williams called out to bystanders to record what was happening. He kept saying, “I’ve done nothing wrong.” But for the simple act of resisting what he considered to be unlawful police contact, he was taken to the ground, placed into a painful armbar hold, and arrested. As he was being led away in handcuffs, he cried out his brother’s phone number and asked someone to call his brother.

What often happens in situations where a motorist is arrested also serves as a revenue stream for tow yards, police, and the courts. The police will impound the vehicle, at a cost to the motorist, of course. They will charge a per diem fee to keep it impounded. If no one pays for his vehicle to be removed from the impound lot, the vehicle will be sold at auction and the proceeds kept by the courts and the police department. It is essentially legalized theft, and for Williams, the whole ordeal started when he left his car running.

If, in the process of impounding a person’s vehicle, drugs are found in the car, what started out as a minor offense could turn into felony drug charges. The law and the way it was used in Williams’ case is now being called into question—but without outrage, little will likely change. One person very close to the man is outraged.

Erin Ortiz is Williams’ girlfriend. She posted the video recorded live from the store, writing in the caption, “Yesterday my boyfriend got arrested for leaving his car running while he ran into 711.”

Williams was actually arrested for resisting arrest, an arrest for a civil penalty, which isn’t an arrestable crime. But in the course of the investigation, if the police officer does not know how to de-escalate a situation, or wishes to escalate one, he can follow through with an arrest for “resisting arrest,” which is what happened to Williams.

“I would like to point out that he doesn’t have a record. Neither one of us and no one I asked has ever heard of this law before,” Ortiz wrote, noting that both she and her boyfriend are hard-working individuals who simply were ignorant of yet another arbitrary law.

Ortiz views what happened to her boyfriend as police harassment, and she may have a point. After all, they were bothering no one (a victimless crime), they were on private property, and they did not wish to make contact with police.

“I’ve never experienced police harassment first hand. It makes me sad that this even happened. My man works. He is nice to everyone. Always smiling. It’s just sad that this happened,” Ortiz said.

Ortiz is very upset over the incident and said something needs to change. She also said the entire incident could have been avoided if the arresting officer had treated Williams with patience and kindness, implying he is an understanding man who would have accepted his ticket and moved on.

“I’m so angry that they treated him like that,” Ortiz said. “I really hope things change. All he had to do was just tell Craig it was against the law and educate him not for all of this to happen.”

What started off as a quick trip to the local convenience store ended with a man needlessly spending a day in jail. Without adequate representation, Williams will likely end up with a criminal record, even though he arguably committed no crime.

“He spent the day in jail like he is a criminal. He is the farthest thing from that. I’m just glad he is okay and was able to keep his cool because it could have been so much worse. I love you Craig Williams….. I’m so sorry this happened to you,” Ortiz concluded.

It is true. What if Williams had thrown strikes in defense of an unlawful arrest? He could have then been tased and potentially shot under federal use of force guidelines. The young couple is thankful that didn’t happen but a senseless act of police harassment ended with a law-abiding citizen being locked up, yet again.

Yesterday my boyfriend got arrested for leaving his car running while he ran into 711. I would like to point out that he doesn’t have a record. Neither one of us and no one I asked has ever heard of this law before. I’ve never experienced police harassment first hand. It makes me sad that this even happened. My man works. He is nice to everyone. Always smiling. It’s just sad that this happened. I’m so angry that they treated him like that. I really hope things change. All he had to do was just tell craig it was against the law and educate him not for all of this to happen. He spent the day in jail like he is a criminal. He is the farthest thing from that. I’m just glad he is okay and was able to keep his cool because it could have been so much worse. I love you Craig Williams….. I’m so sorry this happened to you….

When will Americans, and Californians specifically, in this case, rise up and demand an end to needless laws that only serve to enrich police departments, the courts, and insurance companies?

The time has come to diminish the criminal law code from its voluminous size to a manageable code the American people can depend on. The truth is there are too many laws that make felons out of law-abiding citizens. It is called the criminalization of all Americans and it must end. But it won’t end unless people rise up and demand action from lawmakers.

According to Popular Mechanics, which investigated such anti-idling laws, leaving your car running is illegal in almost every state. Here’s a list. See if your state is listed. Know your state’s law, know your rights, and the information to contact your legislators.

Not surprisingly, to anyone who’s ever walked by an empty police car, it is almost always running proving they are above the laws they enforce.

This has to end now!

A Nuclear War? Over Venezuela?