Spread the love Chicago, IL — A question we ask often here at the Free Thought Project is this: when… 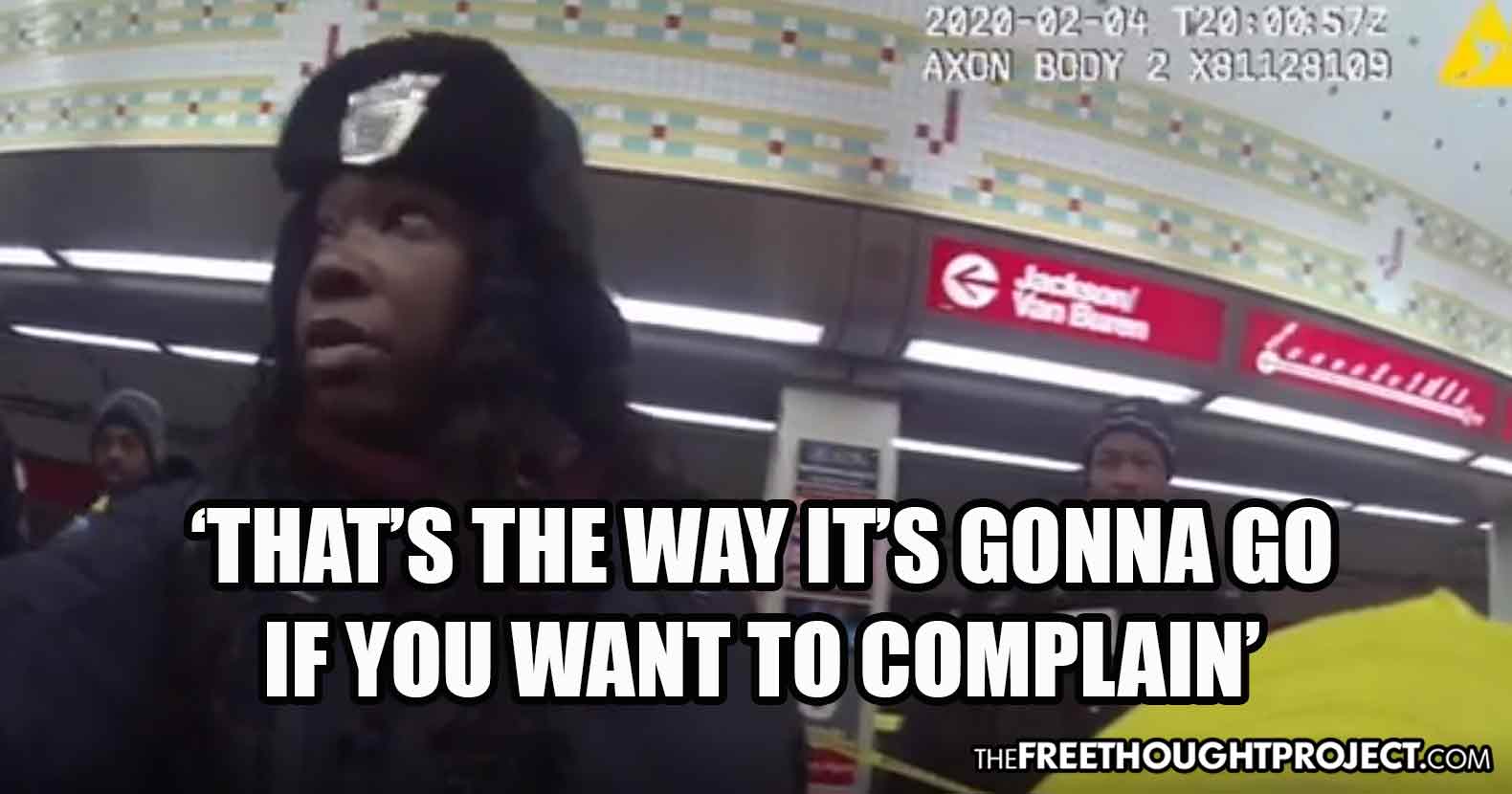 Chicago, IL — A question we ask often here at the Free Thought Project is this: when a cop commits a crime against you, where do you report it? The only place you can report a crime is to law enforcement, so you have no other choice but to walk inside the belly of the beast who hurt you and report their crime to his or her brothers in blue. As the following case illustrates, this is problematic for many reasons and can turn innocent victims into falsely accused criminals in an instant.

Chicago Transit Authority supervisor, Martesa Lee was assaulted by a Chicago police officer while doing her job on the Red Line platform earlier this year. So, she took the only option available to her to report it and went to officer’s supervisor to lodge a complaint. Instead of taking her complaint, however, police told her to get lost or get arrested.

Body camera video of the interaction was just released this week which captured the chilling interaction of intimidation and threats.

The incident unfolded in February after a man was reportedly stabbed by a mentally ill woman and found bleeding out on the train track. Lee, who is in charge of the station, went into work mode and assessed whether or not they needed to stop the train or continue normal operations.

When Chicago police arrived, Lee, like she had done many times before, worked alongside the officers to determine the course of action. As the body camera video shows, police declared the area a crime scene but didn’t have enough yellow tape to mark it all off.

Over a dozen people walked through the unmarked “crime scene” but for some reason, Officer Raymond Haran singled out Lee who was arguably allowed to be there since this was her domain and she was the one who discovered the stabbed man.

Lee held up her hand and motioned that she was on the radio, attempting to reroute train traffic and kept walking. That was enough to push officer Haran over the edge and he then grabbed and shoved Lee out of the area.

“Do not touch me,” Lee told Haran.

“Do not go in the crime scene,” Haran replied.

The interaction was brief, lasting less than a minute with both Lee and Haran returning to their jobs. Several minutes later, Lee found Haran’s supervisor, Chicago police Sgt. William Spyker to tell him what happened with his officer.

“I was walking and talking. They (the CTA control center staff) were telling me to assess the situation,” she said. “He grabbed me and pushed me.”

“Oh, maybe you were in the crime scene. I’m not sure,” Spyker said. “He wouldn’t grab you just for no reason.”

“He grabbed me and pushed me. Clearly, it can be seen, too, (on the body camera),” Lee responded, adding she “wanted something to be done.”

Lee said originally she had no intention of filing a formal complaint, and only wanted to air her grievances over the assault. But Spyker wanted nothing of it.

“If he tells me that you were obstructing the crime scene, we’re going to arrest you,” Spyker said.

“You aren’t going to arrest me for doing my job,” Lee told him.

“Yes, we are,” the sergeant said. “That’s the way it’s gonna go if you want to complain.”

“Is it worth it to you?” Sgt. Spyker asked her.

Knowing that she had done nothing wrong, Lee told police that it was indeed worth facing arrest to expose the bully cop. That’s when the corrupt Chicago police department followed through with their threat and arrested her.

In front of her co-workers, Lee was put into handcuffs as tears ran down her face. The corrupt officer then offers her several more opportunities to retract her complaint in order to get back her freedom. She stands her ground and refuses.

“He pushed me,” Lee told the officer of her assault, over and over again.

As the Chicago Tribune reports:

A local TV crew appeared at the scene and filmed her from behind. She would appear on television later that night in a story about the stabbing, a close-up of her cuffed hands clearly suggesting that she had been accused of the violent crime. The video is still available on the internet.

“I was humiliated, degraded, embarrassed,” she told the Tribune. “I couldn’t understand why it happened. But after they handcuffed me, I never thought about backing down because I had already been belittled in front of my co-workers and the public. There was no reason to back down at that point.”

Nothing in the arrest report mentioned the fact that before she was arrested, Lee attempted to lodge a complaint.

“This is precisely how the code of silence works,” said Craig Futterman, a University of Chicago law professor who specializes in police accountability issues. “It’s controlling that narrative, it’s manufacturing that narrative in a way that protects the officer from discipline and hides ongoing police abuse.”

Naturally, the department has circled their blue wagons and is refusing to elaborate on the incident, claiming that it is under review by the city’s Civilian Office of Police Accountability.

All officers involved in the threatening and false arrest of Lee have also declined to comment, only denying all wrongdoing. Because she was arrested instead of listened to, Lee has since filed a lawsuit against the department and the taxpayers will be the ones held responsible.

“We cannot answer your specific questions due to the pending litigation, but we dispute the allegations of this case and will continue to defend our position,” said Kathleen Fieweger, spokeswoman for the City of Chicago Law Department, which is representing the officers.

Washington State Might Tax 4 People Billions of Dollars. What If They Leave?