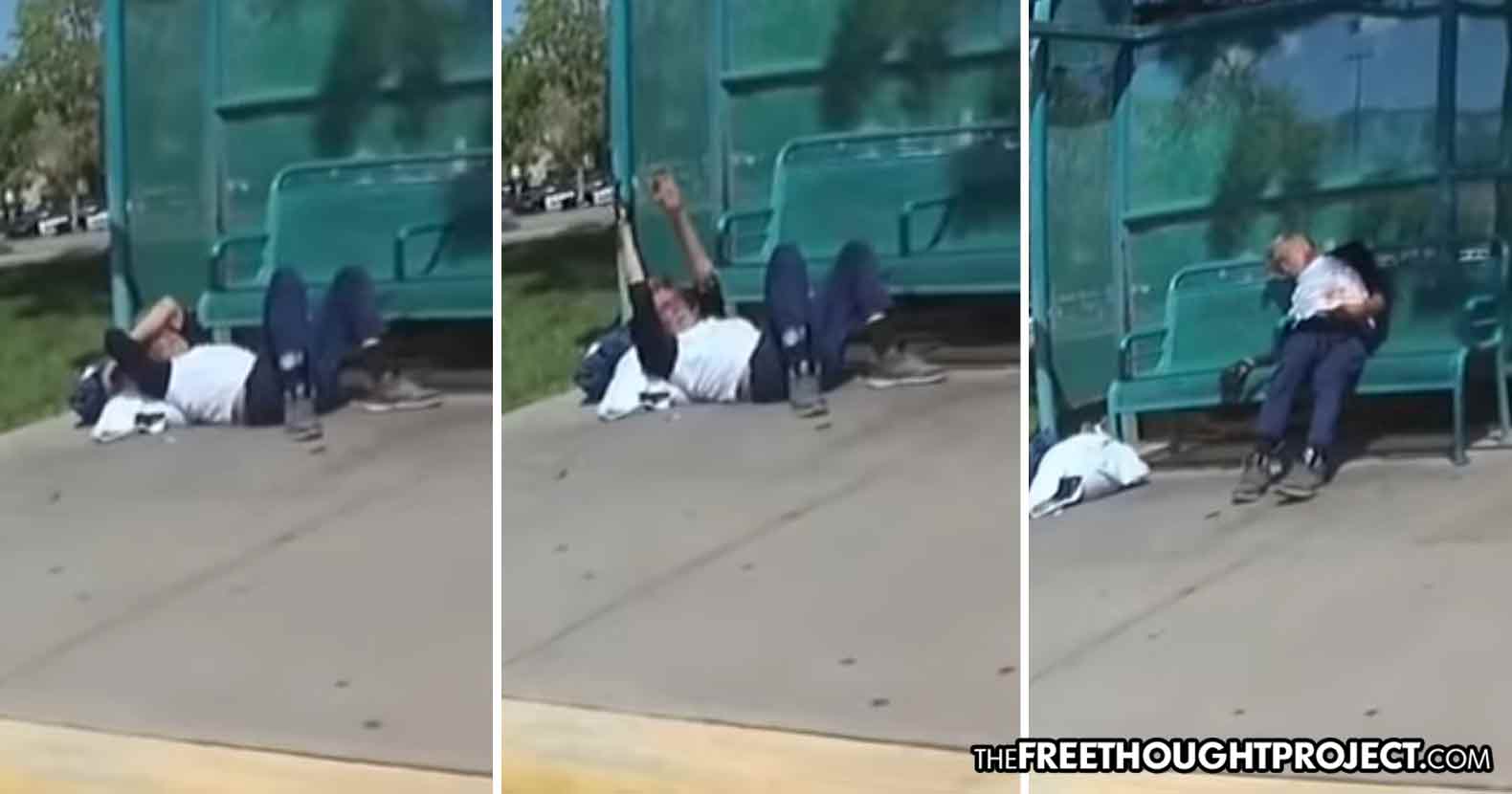 Albuquerque, NM — Graphic body camera footage was recently released from the Albuquerque police department showing a heavily militarized SWAT team surround a sleeping homeless man and then execute him. Police justified their execution by claiming that the homeless man reached for his waistband where he had a BB gun.

Before the naysayers mention it, we know it is nearly impossible to decipher the difference between a BB gun and a real handgun. No one wants to wait until that gun is fired or pointed in their direction before finding out what it is. If anyone points a BB gun at another person — who does not know it is a BB gun — that person is 100 percent justified in defending themselves by any means necessary.

That being said, however, 57-year-old Roger Schafer was killed before he ever pointed the BB gun at anyone or even had it in his hand. Multiple officers dumped countless rounds from their AR-15s into the mentally ill man because he reached for his waistband.

According to police, they were responding to a 911 caller who reported a man in a white shirt at a bus stop who had pointed a gun at him. As police were on their way to respond to this first call, another call reportedly came in by a caller who said a man with a similar description was waiving a gun around at the bus stop, so a SWAT team was mobilized and responded to the scene.

As the video shows, multiple cops with AR -15s quickly surround Schafer. Despite the fact that he was sleeping, police began yelling commands at him which appeared to disorient and anger the reportedly mentally unstable man.

At first, Schafer listened to the cops and put his hands up. However, as they yelled more, it appeared to disorient the man. As the video progressed, Schafer was by no means cooperating with the officers’ commands. Instead of laying down like he was told to do, Schafer sat there, cursing out the cops, telling them to just “shoot me!”

He then sits up on the park bench, while continuing to ignore the officers’ commands. At this point, however, he appears to move his hand toward his waistband but before he can grab anything dozens of shots ring out.

“He was given commands,” Lt. Scott Norris said. “He decided to ignore those commands, and he made that overt act to grab that gun. It is a deadly force situation. Officers responded in accordance with their training. This person presented our officers and everybody involved to include the general public with a deadly force situation. The subject was given clear, concise verbal commands not to reach for his waistband.”

Schafer’s body was perforated by more than a dozen rounds. In a tragic irony, just before officers Paul Durham, Kyle King, and Randy Serrano filled Schafer with holes, one of the other officers fired a 40 mm non-lethal round at the mentally ill man. Sadly, however, instead of waiting to see what his reaction was to the non-lethal, officers opened fire with AR-15s at nearly the exact same time.

“We do not draw any conclusions as to whether the officers acted consistent with our policies until all facts are known and investigation is complete,” Chief Mike Greier said.

Below is the disturbing video of police executing Schafer. Also below is another video — for you to compare to the APD cops — taken from inside an Oregon high school of a student with a real gun.

It is important to point out that these officers in the video above, who were heavily armed, up to and including bulletproof vests and body armor, were unable to resolve a situation without killing a man for merely reaching for his waistband. When we compare the actions of these officers to a high school football coach in Oregon who disarmed a potential mass shooter with a real gun — unarmed and by himself — the response from police in this situation seems that much more ridiculous.

In May of this year, Angel Granados-Diaz walked into Parkrose High School with a loaded shotgun. Surveillance footage captured him stalking the halls of the school before he entered a classroom in which he could have easily murdered dozens of trapped students. However, Keanon Lowe, a football and track and field coach at the high school showed the world how true heroes react to dangerous situations.

Lowe quickly grabbed the gun from Granados-Diaz, got it away from him, and then embraced the troubled teenager with a hug. Instead of being shot and killed, Granados-Diaz was arrested and is now getting help for his problems and will have a second chance at life. Unfortunately, because SWAT cops responded to Schafer and not a cool headed heroic and brave football coach, Schafer will not have that option.

Cops Indicted After Video Showed Them Torture Handcuffed Man, Cover It Up

Are All the Apples Bad? Police In 20 Largest US Cities Fail To Meet Basic Human Rights Guidelines