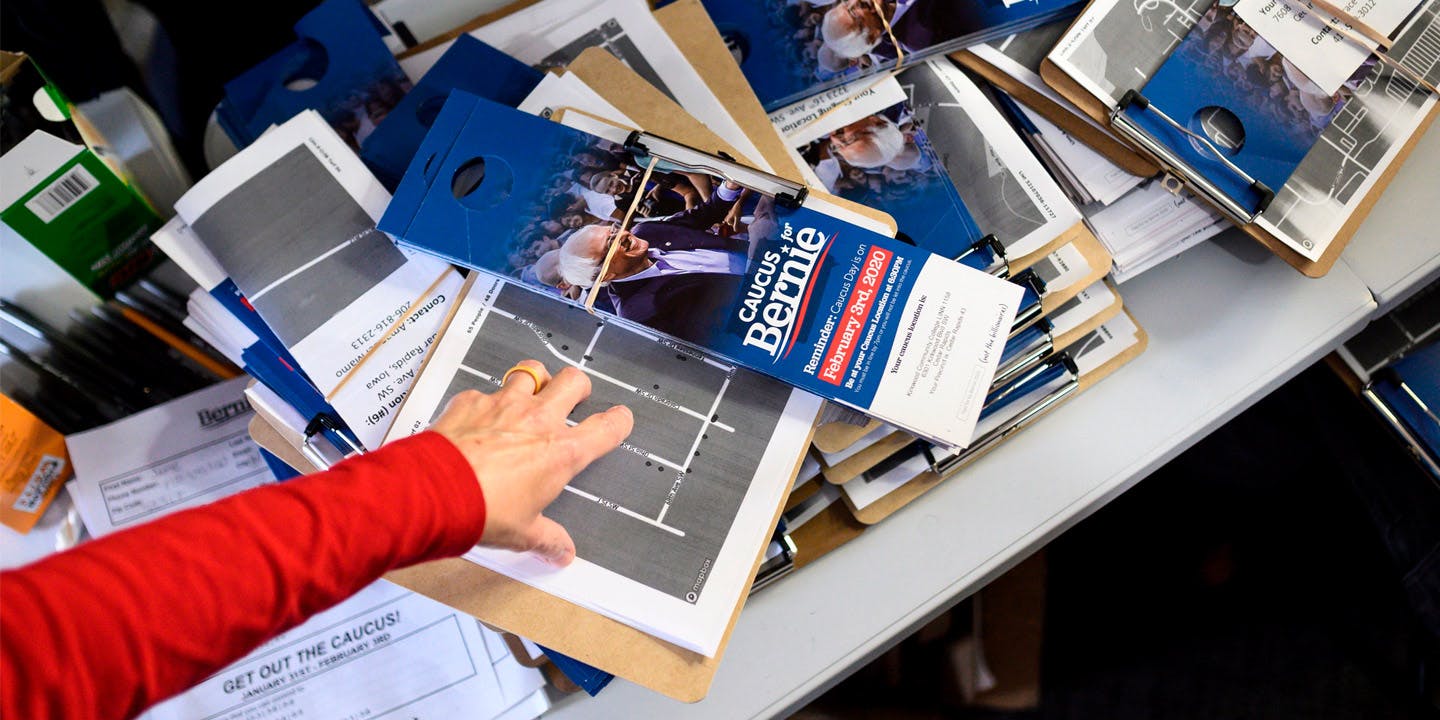 The presidential campaign of Bernie Sanders has a new directive for its army of volunteers in the final week before the Iowa caucuses: Lay off the phone calls.

The new guidance was shared with top volunteers on Saturday, and provided by a volunteer to The Intercept, which independently confirmed its authenticity. The move away from phonebanking comes as Sanders is surging in the polls in Iowa, New Hampshire, and nationally, and is explained in a detailed memo sent via Slack to campaign volunteers by Claire Sandberg, the campaign’s national organizing director. The directive applies to volunteers who live in states that vote in March, which together make up more than half the country.

“Up until now, you have heard us loud and clear that if you are not in Iowa, New Hampshire, Nevada, or South Carolina, the most important things are to: 1) get to one of those states and knock on doors and 2) if you can’t get there in person, phonebank,” Sandberg wrote. But, she continued, “We have already run through most of the calls we wanted to make for this weekend,” citing volunteer participation that has exceeded targets and expectations. “This is definitely a great problem to have,” she wrote, “but this does mean we need to recalibrate.”

Sandberg, in the memo, urges volunteers to pivot either to door-to-door canvassing in their home state, or to friend-to-friend organizing through the campaign’s Bern app. The app, covered in a previous Intercept article, allows a user to find friends in the voter file and enter information about their level of support or opposition to Sanders, and has shown promise to be more effective than phone calls as an organizing tactic.

It is far more effective, campaign leaders have argued, to have friends and relatives urge those close to them to come out to caucus than to carpet bomb phone lines.

Campaign phone calls and text messages, when the volume runs into the millions, can be expensive — and are certainly more expensive than using the app or door-knocking — which may also be contributing to a cost-benefit analysis. In the final week leading to caucus day in Iowa on February 3, Democrats there are bombarded with phone calls from pollsters, campaigns, and outside advocacy groups. That, in addition to baseline spam, creates a cacophony that is hard for campaigns to break through. It is far more effective, campaign leaders have argued, to have friends and relatives urge those close to them to come out to caucus than to carpet bomb phone lines, what is known as relational organizing. The campaign’s original goal for phone calls before Iowa was 5 million, but volunteers have already surpassed 7 million. The Sanders campaign did not immediately respond to a request for comment.

Moving away from the dialer is a break with a practice that has become synonymous with volunteering and is ubiquitous on other campaigns. So much so that on the same day Sandberg sent the new directive, Sanders’s twitter feed urged its followers:

We’ve got a long way to go. It’s going to be a tough fight and we can’t take anything for granted. Knock on doors. Make phone calls. Do everything you can. https://t.co/Xl1lQHiLog

The tweet and the new guidance are not entirely in conflict, as people who live in states that vote in April or beyond will still be able to make calls into early primary states, but the clear emphasis is on friend-to-friend organizing and traveling to early states. The March primaries will kick off with Super Tuesday on March 3, when voters in more than a dozen states will cast their ballots.

The New York Times-Sienna poll released on Saturday showed Sanders with his biggest lead in Iowa yet, at seven points, and national polls — one by Fox News and another by ABC — also show Sanders climbing at just the right time for his campaign. His chief rival for the nomination, former Vice President Joe Biden, meanwhile, has been dealt a series of blows, failing to win endorsements from the New York Times, Des Moines Register, and New Hampshire Union Leader, who variously endorsed Elizabeth Warren, Amy Klobuchar, or, in the Times oddball case, both. (Biden still tops off the national ABC poll.) Those papers were never going to endorse a democratic socialist, but benefited Sanders by not endorsing Biden, who had consistently led in the polls for the past year.

A Sanders event in Ames, Iowa on Saturday was jam-packed relative to the same time in 2016, even though this event included Rep. Alexandria Ocasio-Cortez but not Sanders, noted former congressional candidate Brent Welder, who organized in Iowa for Sanders last cycle. (Sanders, along with Warren and Klobuchar, is stuck in Washington for the Senate impeachment trial, and is relying on surrogates to campaign in the crucial lead-up to the Iowa caucus.)

Now in Ames w @BernieSanders and @AOC. I came to an Ames Bernie rally right before the 2016 Iowa Caucus & there were 1/4 the people. I’ve been to prez events here since 2000 and I’ve never seen anything like this. There’s also a packed balcony above and overflow room with 500 ppl pic.twitter.com/tv8izeSZIP

Biden and Sanders have spent the last week-plus engaged in a lengthy debate over Biden’s record on Social Security. It’s been damaging to Biden, and his supporters in Iowa are urging him to shift away from that fight and back to a conversation about electability.

NEW: With a little over a week until the Iowa caucuses, Biden endorsers in Iowa want voters to focus on his electability argument, rather than his ongoing policy debate on Social Security with Sen. Sanders. https://t.co/JdhMGd4jbe