State-licensed sales of recreational marijuana began a year ago in California, and so far things are not turning out quite… 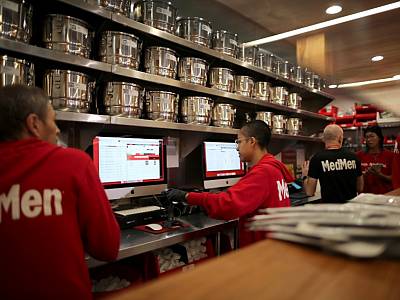 State-licensed sales of recreational marijuana began a year ago in California, and so far things are not turning out quite the way officials expected.

While “state officials estimated there would be as many as 6,000 cannabis shops licensed in the first few years,” the Los Angeles Times reported last week, “the state Bureau of Cannabis Control has issued just 547 temporary and annual licenses to marijuana retail stores and dispensaries.” The New York Times notes that legal cannabis sales totaled $ 2.5 billion in 2018, which is about $ 500 million less than in 2017, before the first recreational shops opened. Marijuana tax collections amounted to $ 234 million at the end of September, which suggests the total for 2018 will be less than half what officials predicted and less than a third of the $ 1 billion annual haul they were expecting within a few years.

What went wrong? Nothing really surprising. California is regulating and taxing the hell out of cannabis, which makes it hard for legal suppliers to compete with the state’s longstanding, extensive, and highly developed black market.

To begin with, marijuana businesses need local as well as state approval. Retailing is allowed in just 89 of California’s 482 cities and just six of the 88 municipalities in Los Angeles County. State law permits home delivery, which should provide a way around local bans, but the Bureau of Cannabis Control has yet to finalize a proposed rule that says deliveries are allowed in towns where storefronts are prohibited.

Even when there is no local ban, would-be marijuana merchants need permission from the local government as well as the state, a dual licensing system that doubles the regulatory headaches. Licensees are subject to the Medicinal and Adult-Use Cannabis Regulation and Safety Act, the Bureau of Cannabis Control’s regulations, and whatever additional rules the local government imposes.

“The cannabis industry is being choked by California’s penchant for over-regulation,” Dale Gieringer, director of California NORML, told the L.A. Times. “It’s impossible to solve all of the problems without a drastic rewrite of the law, which is not in the cards for the foreseeable future.” Cannabusinesses are also hampered by a shortage of banking services, since financial institutions remain leery of serving customers who deal in products that are banned by federal law.

If they manage to get licensed, comply with all the relevant regulations, and find ways to pay expenses and process sales, marijuana merchants still must contend with black-market competitors who are not subject to those regulations or to state and local taxes, which can add 40 percent or so to the retail price. Among states that have legalized recreational use, California has the second highest taxes, bested only by Washington, where the total rate can be as high as 47 percent. By contrast, Alaska collects $ 50 per ounce from growers, while Michigan’s legalization initiative calls for a 10 percent retail tax.

“Because we are up against high taxes and the proliferation of illegal shops, it is difficult right now,” the owner of a pot shop in Wilmington told the L.A. Times. “We expected lines out of our doors, but unfortunately the underground market was already conducting commercial cannabis activity and [is] continuing to do so.”

Despite their avowed desire to displace the black market, legislators and regulators acted as if it did not exist. “There’s always been a robust illicit market in California, and it’s still there,” industry analyst Tom Adams told The New York Times. “Regulators ignored that and thought they could go straight into an incredibly strict and high-tax environment.”

Who Owns The Fed?…Does It Even Matter?